The map below shows the location of Israel (at the star). 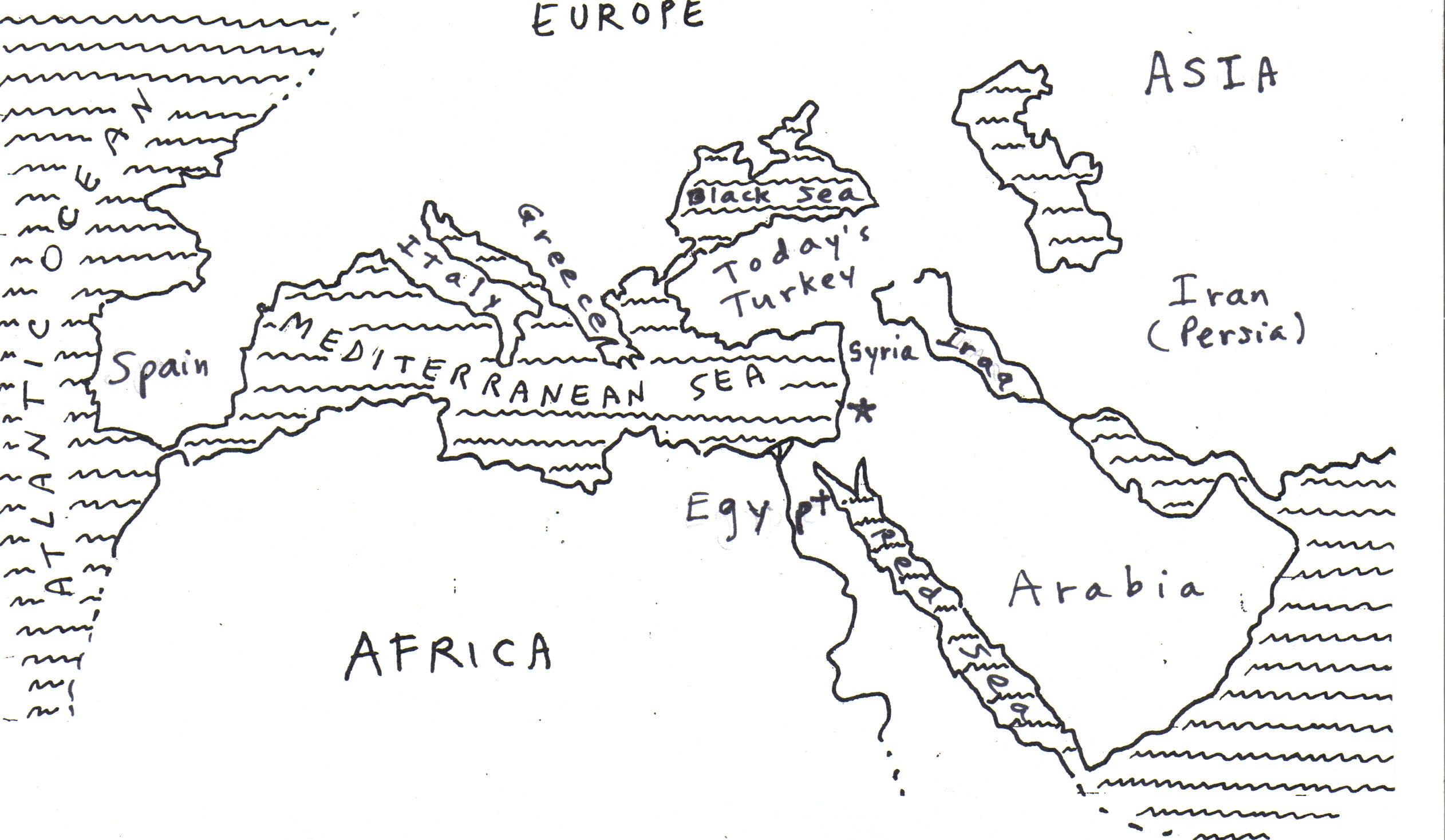 The five maps below show Israel at five different occasions.

1. Israel when Abraham moved there:

When Abraham moved into the land around 2000 BC, it was called the land of Canaan, and the local people were called Canaanites.  The border to the left of Canaan marks the shoreline of the Mediterranean Sea.  Notice the names of the seas and rivers that form the right-hand boundary. These names remain the same throughout the Bible. Abraham, his son Isaac, Isaac’s son Jacob, and Jacob’s twelve sons lived in this land.  The events of this time are in the first book of the Bible, Genesis.

Jacob has another name: Israel.  The people at some point began to call themselves by his name: the people of Israel, or “Israelites.”

One of the twelve sons, Joseph, is sold as a slave and taken to Egypt, which is located to the left of this map, as you saw on the location map.  Joseph later invites the entire family to come to Egypt: this would be between 1800 and 1900 BC, and at this point the book of Genesis ends.

The next book of the Bible, Exodus, tells us that the people of Israel later become slaves in Egypt.  Between 1300 and 1500 Moses leads them out of Egypt.  After Moses dies, his assistant named Joshua leads them back into the land of Canaan.  They take over the land, rename it Israel, and divide it into twelve areas as explained on the next map.  The 2nd to 6th books of the Bible tell of these events.

Meanwhile, by around 1200 BC, a group of Greek background called the “Philistines” invades and controls part of the coastline.  After New Testament times, when the people of Israel are driven out of their land by the Romans, it becomes common to call this area “Palestine.”  That is a Latin way to pronounce “Philistine.”  The term “Palestine” is not used in the Bible.

Therefore the land where the Bible events happened has three names: Canaan, Israel, and Palestine.

2. After the escape from Egypt.

After Joshua led the Israelites (people of Israel) into the land of Canaan, they renamed it “Israel” (the other name of Abraham’s grandson Jacob) and divided the land into twelve areas. These events are told in the Bible book called “Joshua.” Each area was meant for the descendants of one of the twelve sons of Jacob, with one exception: the descendants of Levi did not receive a land area, because they were the priests and were scattered around the country.  In order to reach the total of twelve areas, none of the areas was given to Joseph, but areas were given to each of his two sons.

During these years, the people of Israel were often attacked by surrounding tribes and by the Philistines.  Notice that the area of the Philistines is left blank on this map, because it was not controlled by the Israelites.  The events of this time are in the Bible books called Judges, Ruth, and 1 Samuel.

3. Greatest Expanse, at time of David

Around 1000 BC, David defeated the Philistines, expanded the area under his control, and took over the city of Jerusaleml, making it the capital city. 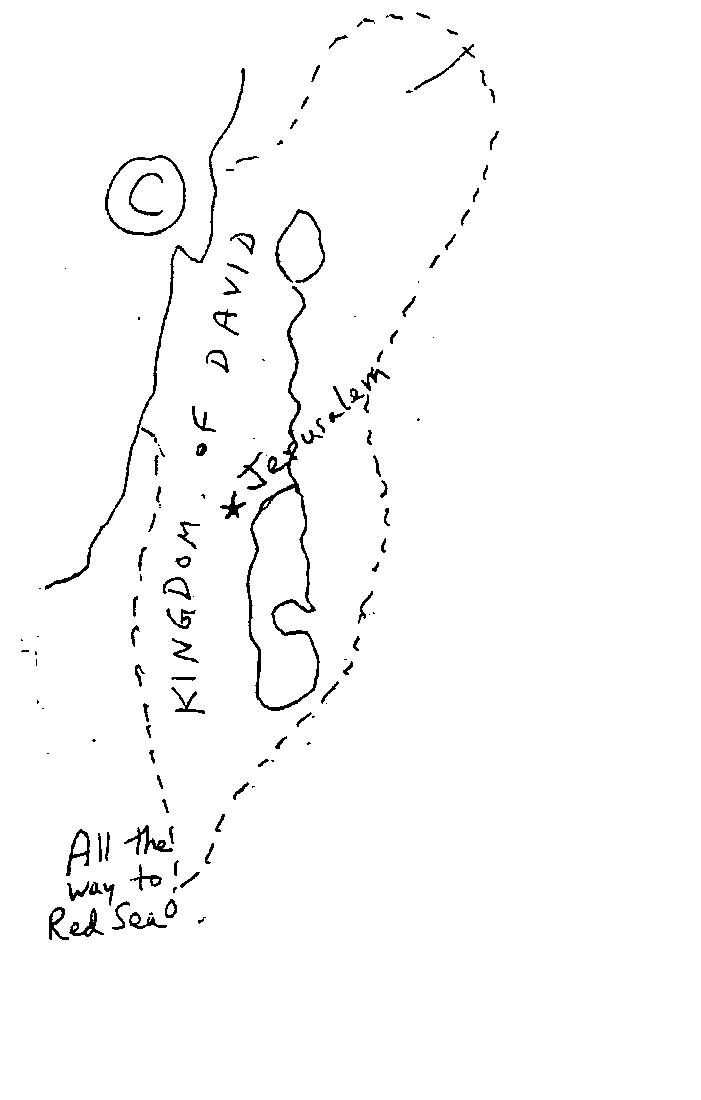 After Solomon’s death, the Israelites divide into two kingdoms, as shown on the next map.

After the death of David’s king Solomon, the northern part of Israel refused to follow Solomon’s son, and created its own kingdom, which they named “Israel.”  Notice the name of their capital city: “Samaria.” 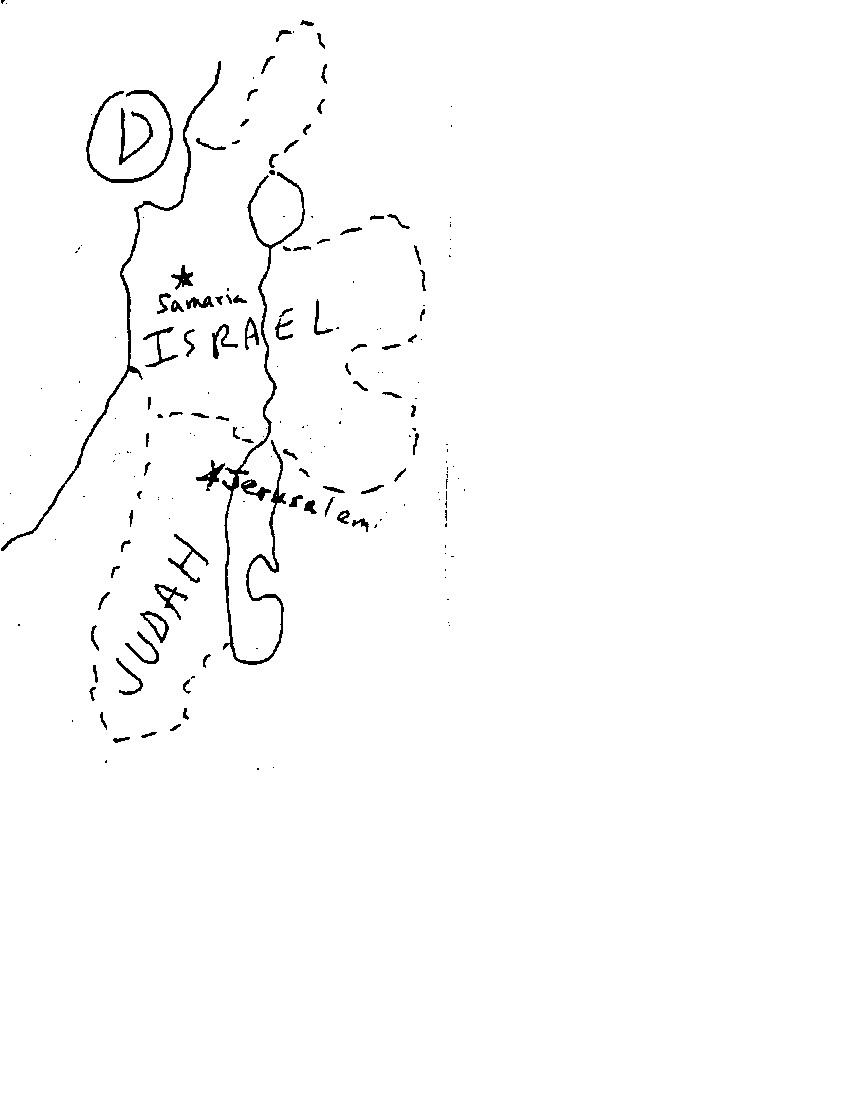 The people in the south continued to be ruled by the descendants of King David.  Their kingdom is named “Judah,” because Judah was the largest tribal area in the south.  The capital is Jerusalem.

In 722 BC the northern kingdom (Israel) was ended by the Assyrian empire, which was expanding from Iraq.  Many of the people were deported to Iraq.

In 586 BC the southern kingdom (Judah) was ended by the Babylonian empire, which had defeated the Assyrians and was taking over their territory.  Many of the people were deported to Iraq.  From this time it began to become more common to call the people of Israel by the term “Jews,” because they were from “Judah.”

The following events happened during the time period (about 400 years) in between the end of the New Testament and beginning of the New testament:

In 323 BC, Alexander the Great conquered the Persian empire, and the Jewish people were then under Greek rule.

In 165 BC the Jewish people formed an independent kingdom centered in Judah. (some Bibles print some books written by the Jews, in the the Greek language, during the period in between the Old and the New Testament time periods. These books are called the “apocrypha” or the “deutero-canonical books”).  The Bible that is the authority for the Protestant churches consists of the Hebrew Old Testament and the New Testament. The apocrypha is sometimes included for historical interest but is not regarded as having authority for church teaching. (to see these book, go to Bible Books and scroll down to OTHER BOOKS.)

In 63 BC the Romans conquered the area.  They placed a man named Herod as king of this area, under Roman control.  Herod was the king when Jesus was born.  The next map shows the situation at the time of Jesus.

Under Roman rule, there are now three provinces.  The middle province is named after the city of Samaria, which had been the capital city of the northern kingdom on the previous map. 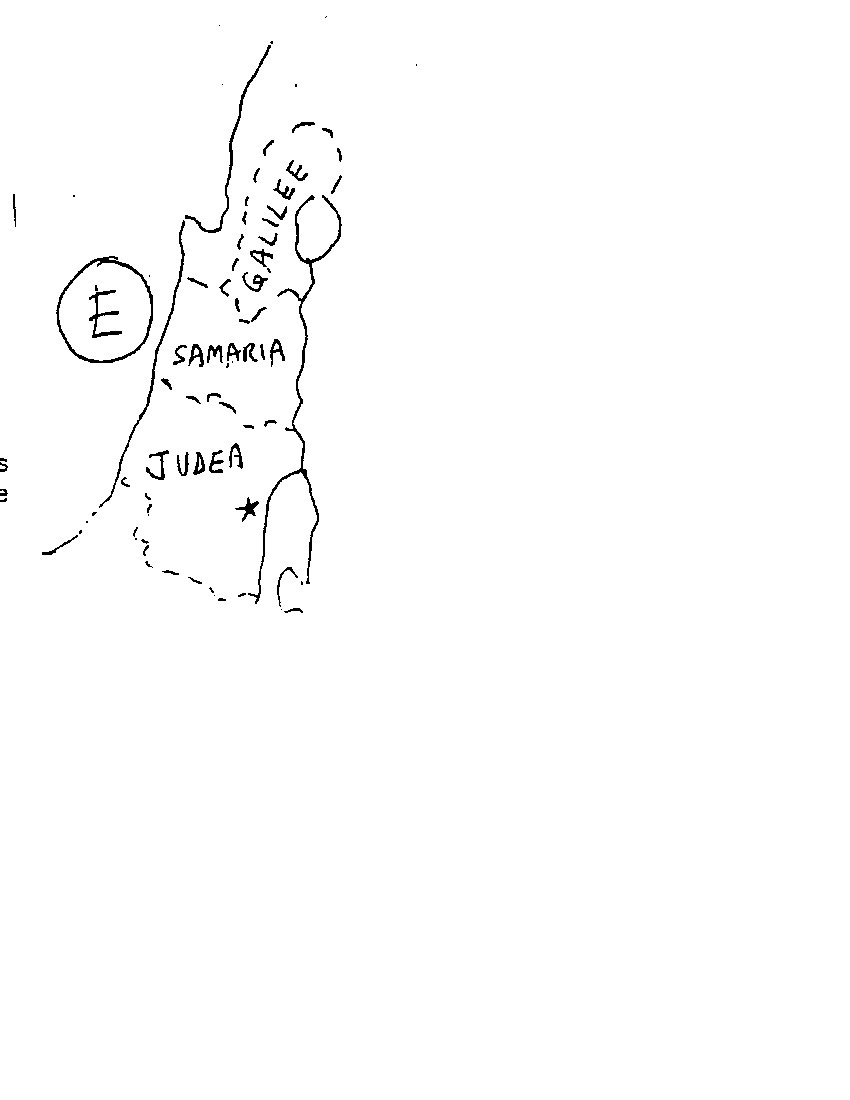 Judea is our English way to pronounce what the Romans Judah in their Latin language.  The star in the province of Judea is the city of Jerusalem.

Jesus died around 33 AD.  The lands shown on this map continued to be ruled by Roman governors and descendants of king Herod.  In 70 AD the Romans destroyed Jerusalem and made the Jews leave.

The Books of the New Testament were written in Greek. The first four books tell about the life of Jesus, and are called Gospels. The rest of the books are letters written by Christians in the first centuries. The Old Testament plus the New Testament is the Bible used in Protestant Churches The Roman Catholic Church adds the Aocrypha.

Return to Bible as a Whole          Go to Old Testament Contents