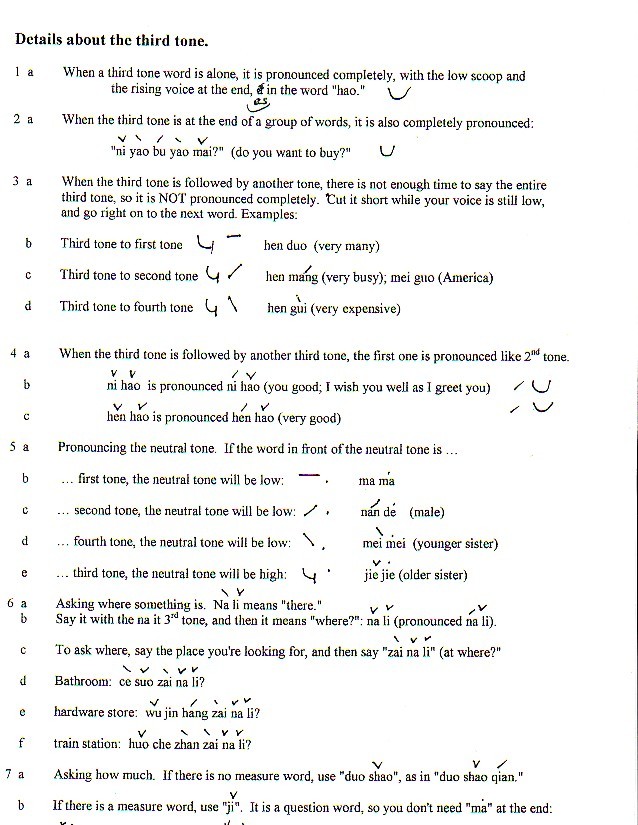 More about line 2a.
The word “ni” means “you.” The word “yao” means “want.” The word “bu” means “not.” The combination “yao bu yao” means “want not want,” which is a way of asking whether you want something or not. Add “ni yao bu yao” this to your “combinations” page, with the meaning “do you want?”  Add yao and mai to your dictionary, with the correct tones. The word “bu” (not or no) is sometimes second tone and sometimes 4th tone., so write “bu or bu,” with an upward accent mark on the first one and a downward on the second one.

Here are the other words introduced today, to add to your dictionary.

In 7a, “duo” means much, and “shao” means little; together they mean “much or little,” which we usually say in English as “how much.”  the word “qian,” pronounced “chee-enn,” means “money.” All together: “how much money?”

In 7b, another way to say “how much money” is “ji kuai qian.”  The word “ji,” when it is in 3rd tone, means “how much.” The word “kuai,” pronounced Kwai, to rhyme with “sigh,” is an example of a “measure word.” The meaning is “units of.” So the little translation is “how many units of money?”  In English, we shorten this to “how much money.”

Other examples with “ji, with other measure words” are:
“Ji zhang zhi,” pronounced “jee jahng zhi,” (zhi is third tone, zhang is first tone) is meaning “how many units of paper,” in English, “how many sheets of paper?”
“Ji zhi niu,” pronounced jee jr nee-oh,” meaning “how many units of cows,” in English, how many head of cattle?”The zhi in this sentence is first tone, and the niu is second tone.

Other words to add (write the correct tone):
duo means “many,” shao means “few,” so duo shao means “how many,”
ji (3rd tone) also means how many. Use “ji” if there is a measure word.

Examples:
ji kwai qian means how-many pieces of money (kuai is a measure word)
duo shao dian means “how much money” (there is no measure word)

Here is a Chinese conversation youtube. It is good because the sentences are pronounced both by a man’s and a woman’s voice, and the tones are clearly marked.  https://www.youtube.com/watch?v=8Md0pTWY8Os

The opening sentence, da jia hao, is literally “big family, greetings.”  Big family stands for “everyone.” Hao is the standard word used in making a greeting, and it also happens to mean “good.”

The next sentence, “ni hao,” literally means “you, greetings.” The two words are both in third tone, so following the rule in my lesson 9, you will pronounce the ni as if it were a second tone. The word hao here is a good example of what third tone sounds like.

Note that the third sentence includes the word shenme. It means “what?”  The “n” is not meant to be pronounced, so it actually sounds like “shemme.” The literal meaning of “ni jiao shenme” is “you called what?”  In this sentence, the word mingzi, which means “name,” is optional (the question has the same meaning whether or not you add the word for “name).

The fifth sentence, with the word for teacher, is a great example of what I teach in my lesson 10, that the third tone is not fully pronounced when it is followed by another word. So here the word “lao” is a third tone, but the speaker only goes down, but does not take time to go up, because he passes directly to the next word, shi. (this is one of those where the letter “I” is not pronounced, but rather you just say “sh.”)  This is also a great example of hearing first tone.

The sixth sentence includes the word for student. This is one of those hard-to-pronounce words, but they say it so fast that you won’t be able to pronounce it right just by listening.  The word is “xue.”  You say the soft s followed by an umlaut, the add “ye” as in the English word “yet.”

The best way to use a site like this is to hit pause after each new phrase, and repeat it over and over again.  Best wishes!