You can get an overview of world history in five minutes by paging through these sheets.   See it first on YouTube.  Then to see the printable pages ,  click here..

You can also select one empire at at time by clicking on the chart below.

Here are the Additional Pages:

(15 more countries that you can add gradually after you are comfortable with the basic set of 30. There are also 3 blank maps for you to make your own empire pages). The extra countries are listed on the chart below. To get the printable versions,  click here.

World Time Line. Abbreviation key is below it. 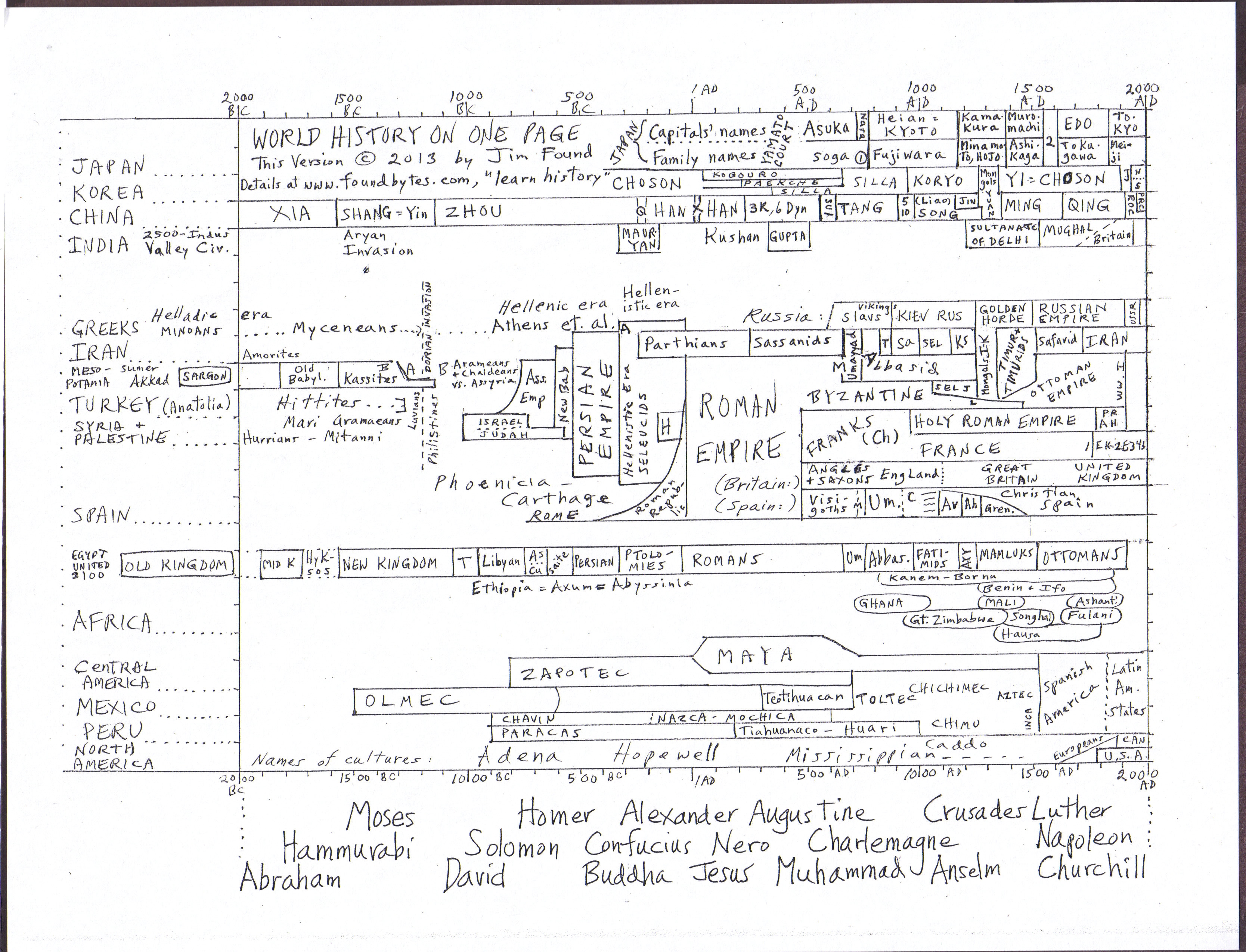 This timeline is introduced step by step on youtube.

Abbreviations and Notes for World History on One Page

Japan line: at 1, emperors regained power from Soga family and carried out the “Taika reforms.”
At 2, the era is represented by two place names. Azuchi castle and Momoyama castle.  Korea line:  At the far right, the J stands for the occupation by the Japanese (1910 to 1945),  and the NS stands for the division since 1945 into North and South Korea.

China line: The Q stands for Qin dynasty (the previously most common spelling system for Chinese words, the Wade-Giles, spells it Ch’in, from which we got our word “China.”)  The X stands for Xin (Wade-Giles Hsin), which interrupted the Han dynasty briefly from 9 AD to 25 AD.  3K stands for Three Kingdoms, and the 6 dyn stands for 6 dynasties. The 5 and 10 stand for “Five Kingdoms and Six Dynasties.”  [details of these two eras are found under “learn history” at www.foundbytes.com.] The Qing dynasty is spelled “Ch’ing” in the Wade-Giles system, and is also called the Manchu dynasty.  The ROC stands for Republic of China, which was started after the Qing dynasty was overthrown in 1911 and still continues today on Taiwan. The PRC (People’s Republic of China) conquered mainland China from the ROC in 1949.

The Greek line: The names of the various eras listed come from the word “Hellas,” which is the Greek word for their homeland. Alexander the Great, king of Macedon, first conquered the Greek city-states, then conquered Persia. The following era, in which Greek language and culture was widely disseminated in western Asia, is called the “Hellenistic era.” After his death, the descendants of some of his generals ruled different parts of the area he had conquered. The Middle East and Iran was ruled by the Seleucids, while Egypt was ruled by the Ptolomies.

The Iran line: The Umayyads and Abbassids, ruling families of the Arabs, also extended their rule to Iran. They were displaced in Iran by the regimes indicated by this code:      T = Tahirids;     Sa = Samanids;     Sel = Seljuk Turks;     KS = Khwarezm Shahs;     IK = Il Khan, the name taken by the Mongols when they controlled Iran.

Mesopotamia line: (The word Mesopotamia is from the Greek words for “between” and “rivers.” It is the land in between the Tigris and Euphrates Rivers, present-day Iraq.)  The alternating B’s and  A’s means that the Babylonians and Assyrians were alternating as the dominant power. Then the Arameans (Ar) entered from Syria and, with the Chaldeans (CH) , struggled for dominance against the Assyrians. The Assyrian Empire was defeated by the New Babylonia Empire (New Bab), which was led by the Chaldeans.

The letter M above the word BYZANTINE stands for Muhammad (also spelled Mohammed) who originated Islam, and brought all the Muslims under his rule. The title for the ruler of the Muslims was “caliph.” This title was held after his death by four of his companions in succession, and then by the Umayyad family, followed by the Abbasid family. The Abbasid caliphate was finally ended by the invasion of the Mongols.

The Turkey line. The area we now called Turkey was known formerly as Anatolia, from the  Greek word “anatello” that means rising or dawn, because from Greece it lay in the direction of the sunrise. The L in the Byzantine Empire is Latin Empire of Constantinople (1204-1261).

Syria-Palestine line: Just to the left of the Roman Empire, the H stands for the Hasmoneans, a Jewish kingdom established by the Maccabee family, which had self-rule for about a century until it was absorbed by the Romans. The right-hand half of this diagram uses this line to portray developments in Europe. The (Ch) means Charlemagne, who established an empire in today’s France, Germany, and northern Italy. One his successors established the “Holy Roman Empire” in France and Northern Italy. It was ended by Napoleon in 1806. The emperor at that time continued to rule a portion called the Austrian Empire, and later also became emperor of Hungary. It was an heir to the throne of this combined empire (AH) who was assassinated in 1914, sparking World War I. The PR means the Prussians, who became dominant in northern Germany and formed the German Empire in 1870.  Both these empires were defeated and brought to an end by that war.

At the end of the France  line, the E stands for Empires (the first ruled by Napoleon, the second by Louis Napoleon).  The numbers represent First Republic, Second Republic, etc.; K = rule by kings.

The next line shows developments in Spain. The Visigoths, a Germanic tribe, ruled there after the Roman Empire ended. They were replaced in 711 by invading Muslims (M). When the Ummayads were defeated in the Middle East, one of the survivors invaded Spain and the family established a dynasty there in 756. In 927 its ruler proclaimed it to be the Caliphate of Cordoba (C). After 1000 the region disintegrated into independent Muslim states until they were reunited by invaders from Africa, first the Almoravids (Av) in 1085 and then the Almohads (Ah) from 1172 to 1239.  Meanwhile the Christian kingdoms were gradually expanding from the north, so the last Muslim kingdom shown ruled only the area around Grenada in the south. It was defeated in 1492 by King Ferdinand and Queen Isabella, and Spain then came totally under Christian control.

On the Egyptian line:  Mid K = Middle Kingdom; T = Tanites; Cu = Cushites, who ruled southern Egypt while the Assyrians (As) occupied northern Egypt.  The Ptolomies were descendants of Ptolomy, one of Alexander The Great’s generals; Um = Umayyand Caliphate; Abbas = Abbassid Caliphate. Ayy = the Ayyubids, the kingdom formed by Saladin, who fought King Richard of England in the third crusade.  At the bottom right:    USA = United States; CAN = Canada\